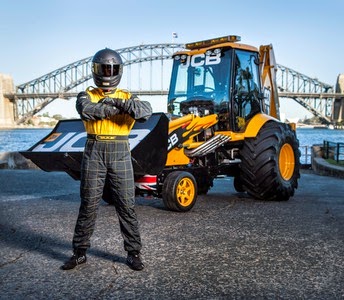 If women needed any more proof that men’s heads are all too easily turned by things noisy and mechanical. Look no further than this.

Desirable? Hugely.
Practical? Not in the least.

Regardless of that, there’s an awy lot of folk out there who would want this new record breaker in their garage. The JCB’s unique, one-off GT has now been officially confirmed (by the Guinness Book of Records) as the fastest digger on earth.

At Bathurst in Oz last week, the fastest backhoe loader in the world became official with a speed of 72.58 mph (116.82km/h).

With a light weight steel chassis and JCB Fastrac tractor rear axle, the JCB GT was originally designed to do wheelies on drag strips in the USA. The ‘572 big block’ Chevrolet V8 produces around 1300hp, helped on its way by a reduced weight loader and digger made from aluminium and bodywork from fibreglass.