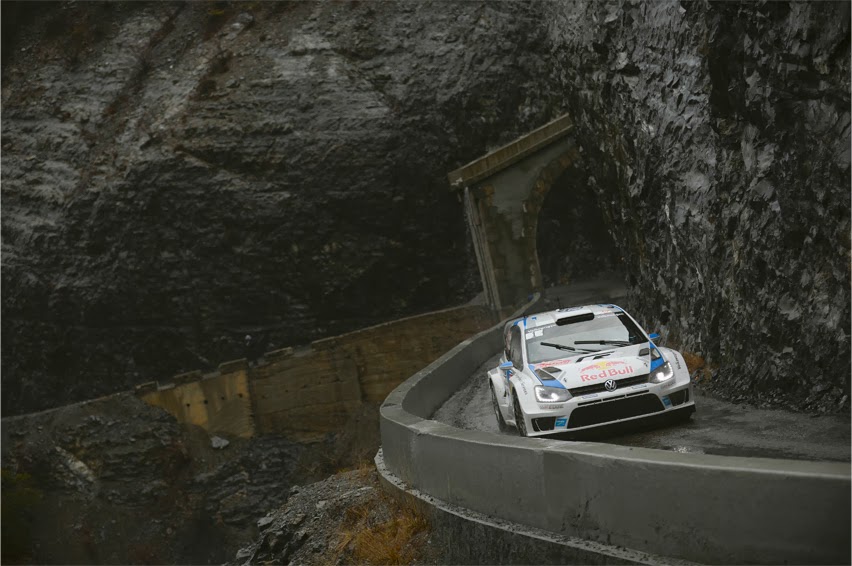 Not a bad day’s work for the World Champs, from fourth place to first, Sébastien Ogier/Julien Ingrassia fought back to snatch the lead at the end of day two of the Rally Monte Carlo.

Jari-Matti Latvala ended the second day in fifth place having fought back through the field from 17th to sixth yesterday, and then suffered a puncture today which dropped them to eighth place after a puncture on day two but they raced back into fifth before lights out tonight.

As for Andreas Mikkelsen he needed ‘spectator power’ to lift him out of a French ditch and now lie eighth with the final day to come.

At the overnight halt, Sébastien Ogier said: “Thankfully we made an intelligent tyre choice today. However, the heavy rain meant conditions were once again extremely difficult. In particular, the spots with fresh bitumen were almost like ice. There is a good reason why we drivers call those conditions ‘Black Ice’. On the whole, we are happy with the second day. After all, we not only reduced the deficit but are actually ahead of Bryan Bouffier going into the final day.”

Jari-Matti Latvala commented: “Another ‘Monte’ day that once again had its highs and lows, but also a nice finish. The morning’s loop was very slippery and difficult. The sheer quantity of rain had made the patches of bitumen particularly tricky. Unfortunately we suffered a puncture after the midday service, and lost a lot of time as a result. Winning the final stage of the day and climbing back up to fifth place has given us plenty of motivation ahead of the final day. A top-five finish was our goal right from the start, and we are still on course to achieve that.”

Andreas Mikkelsen said: “It is no coincidence that the Rally Monte is regarded as the most difficult rally on the WRC calendar. It is incredibly hard to make the right tyre selection. It is almost impossible to judge the conditions out on the route correctly. A lot of grip here, standing water or icy sections there – it all changes dramatically from one metre to the next. We felt the effect of that on the first special stage of the afternoon. On slicks, we had no chance of avoiding sliding on a slippery spot in a very slow curve. Fortunately we could continue, but we lost a lot of time. On top of that, I had to let my team-mate Jari-Matti Latvala through, as he was flying on different tyres. We were ultra-cautious on the final special stage in the dark. I am pleased to have arrived in Monaco.”
Posted by John Fife at 23:53