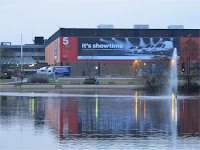 The CV Show opens its doors to the public on Tuesday at the NEC in Birmingham with everything from car derived vans to heavy trucks. It's Britain's biggest commercial vehicle show and according to the manufacturers, cv products are more profitable than private cars.

The industry will have its best claes and shiny shoes on after lean times a few years back during the economic recession. That means there will be a lot of new kit to see including the first public showing in the UK of the new Ford Transit. It will be interesting to see if it is any better looking in the metal than it is in pictures! For the truckies, Volvo will show its new FM.

As for tomorrow, there is a succession of press conferences ahead of the show, but no sneaky peeks inside the exhibition halls!
Posted by John Fife at 22:08