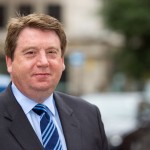 The Motor Sports Association has a new Chief Executive following the retirement of Colin Hilton after 20 years at the wheel.  Normally such an appointment would be greeted with some reservations - better the devil you know than the devil you don't. But that would be churlish and unfair, wouldn't it?

Following a career which started in the FMCG (Fast Moving Consumer Goods) sector working for the likes of Cadbury, Guinness, PepsiCo and a dog food company, the new man at the top is Nick Bunting.

More recently he spent 14 years with the Rugby Football Union developing many aspects of its operations including funding, planning, resources, facilities, digital and social media. He also joined The Prince’s Initiative with particular emphasis on supporting the over 50s into business creation.

So no motor sporting background there then.

Other posts and duties have included being a director, company secretary and chairman of the Finance Committee at sportscoachUK, the body charged with the development of the standards and the profession of sports coaching in the UK, and he was also a trustee and director of sports charity the Rugby Football Foundation (RFF). He was also the chair the Regional Sports Partnership and the Northamptonshire County Sports Partnership (CSP).

But perhaps there is a reason for that. As an advisor to LOCOG (the Organising Committee for the London Olympics) and a Board Member of the National Skills Academy for Sport and Leisure, the new man might yet bring some fresh thinking to a sport which is bedevilled with problems.

The Forestry Commission is restricting access to rallyists and roads are not being maintained to the standard we would like, despite ever increasing charges. We still don't have a UK-national law for the closure of public roads, despite the efforts of 2300 CC and the Isle of Mull establishing a precedent -  23 years ago for goodness sake! On the racing front, circuits are coming under ever stricter 'noise control' legislation, especially with pressure from folk who buy a house near a race circuit - then complain. And whilst there is a need to ensure safety in our sport, the cost of complying with ever more MSA requirements and the need to invest in more equipment and services places an increasingly intolerable burden on organisers. And we wonder how to encourage newcomers to the sport, not just participants, but the organisers of the future?

We can but hope. Nick Bunting's record is impressive, especially the fact that when he was working with the RFU he helped to generate in excess of £200m external investment into grassroots sport development which benefited many thousands of young people.

So, fingers crossed. Let's give the man a chance. British motor sport has managed to survive this far, let's just see if some real progress can be made this time.