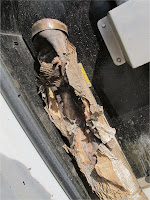 Some folk may be surprised that a squashed exhaust could force the retirement of an ex-works World Rally Car from an event, but that was what happened to Euan Thorburn at the weekend. His Ford Focus encountered a football sized rock on the apex of a corner, probably pulled out by David Bogie's ex-works Ford running ahead of Thorburn. "We were committed to the line," said Euan, "we had no hope of missing it, and hit it pretty hard. We were lucky to get out of the stage, never mind carry on."

So here's a picture of the section of pipe between the downpipe and the box - well squished!

On another note. In this week's newspaper, 'MN' has decided not to comment on last weekend's kerfuffle surrounding press invitations to the Granite City Rally. They're happy with the report and the pictures they've got, and are content to let the matter rest there and let bygones be bygones. Fingers crossed for next year!
Posted by John Fife at 16:24