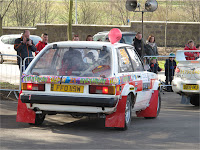 Well, that was a first. Denied entrance to a public park by a very nice chap in a G4S uniform. Since there was very little directional detail in the Granite City Rally programme I turned in at the orange arrow and since there were no other signs on display, this was obviously the way in. "Not so" said the security guard and he kindly directed me to the public car park in the public park.

On arrival, the Start area was very securely fenced off , no doubt due to the need to protect the Provost from the anticipated great crush of spectators, and the rally start ceremony got underway helped by the dulcet tones of Stevie Brown.

It was bad enough not inviting 'Motorsport News' to the rally, but when the Scottish Rally Championship Press Officer was denied access to the start area that was carrying things just a bit too far. Especially in view of the fact that there were quite a few people wandering around within the security compound neither wearing tabards or displaying any form of rally pass or permit. Odd. Very odd.

However, my day was lightened by the arrival of the balloon festooned and be-stickered Talbot Sunbeam of Malcolm Robertson and Katie Stimpson. Naturally we all thought it was Malcolm's 21st birthday, but he grudgingly admitted it wasn't. It was actually Katie's 21st and the team had gone to town with shiny banners taped to the flanks and rump of the Sunbeam. At least they put some fun into a cold but bright start to this year's Granite. Happy birthday Katie.

As for stories from the rally during the day? That will be a challenge. At least I get a good phone signal in the Rally HQ car park.
Posted by John Fife at 11:15