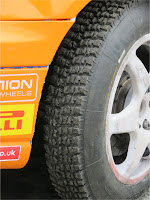 Jock Armstrong undertook a 'sighting run' in his Subaru Impreza at the test stage earlier today ahead of tomorrow's Border Counties Rally. He was accompanied on this run by one Quintin Milne Esq!

"Whether he was showing off or not, I was impressed," said Quintin afterwards talking about Jock's driving, but he completely agreed with Jock's comments.

"The snow tyres are good on the snow, but even with snow tyres, it's slippery on the ice and the car is sliding about quite a bit," said Jock, "then when you do get on to the gravel sections you have to back off so that you don't puncture the snow tyres."

"Conditions definitely favour the use of snow tyres," added Jock, "the ice is polishing in places, but it's so cold it's completely re-freezing after you go over the surface."

As for tomorrow, it's all dependent on what happens tonight. For the moment, there is snow in the stages on the high ground and it ain't going anywhere.

On the basis that you can't keep a good man down, Jock is well up for it: "I was like a kid looking in the mirrors to see how much snow spray I was kicking up," he chuckled.
Posted by John Fife at 13:23