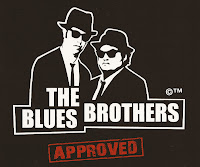 The Kings Theatre in Glasgow was transformed last night with the arrival of the Blues Brothers, the Bluettes and the rest of the band.

Brad Henshaw’s Jake was worthy of a failed ‘Strictly Come Dancing’ audition, but his flicks, kicks and somersaults were hugely entertaining, although medically worrying, and his soulful rendition of Joe Cocker’s ‘With a Little Help from my Friends’ was uncanny.

Chris Chandler’s Elwood had his ‘briefcase full of blues’ and a harmonica which could melt tablet and included a vocally sumptuous ‘Under the Boardwalk’.

As for the Bluettes, they were scarily good, and dance? There was a helluva lot going on under those sequins. And the music from the drums, two guitars, one sax and one trumpet sounded a whole lot bigger – and nearly as good as a BDA in high speed gurry mode. I wonder if I can get more tickets for tonight?
Posted by John Fife at 10:50