It was mighty cold at Charterhall for the second round of the Blue Scottish Tarmack Championship, but nowhere near as nippy as it was last week for the Border Counties Rally. Even so, it tried to snow a few times, but it came to nought. 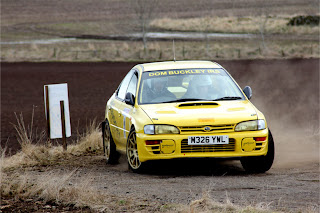 Folk living nearby could have been forgiven for thinking that fighters had returned to the old wartime airfield, as Stephen Ronaldson’s mellifluous Metro 6R4 sent shivers down the spine (or was that the cold?) as the howl of the 2.5 litre V6 echoed across the landscape. Magic, pure magic, bt he didn’t win. He came third.


Taking his first outright rally victory, on only his sixth rally, was Dom Buckley but he was harried all the way by Dale Robertson. At the end, 12 seconds separated the duo after 6 stages. Buckley was fastest out of the blocks in the yellow Impreza by 6 seconds from Robertson, then the Mitsubishi driver hit a tyre marker on the second test and dropped a further 10 seconds to young Dom’s pace.

Robertson was fastest on stages 3 and 5 but it wasn’t enough. Afterwards Buckley recalled: “I was leading this event by 21 seconds two years ago, then crashed out. And with two stages to go this year I was leading again, by 21 seconds!” This time there was no mistake, but when asked if this was a run out ahead of the Jim Clark Rally, he just smiled. But didn’t say no.

And as for the last ever motor sports event at Charterhall, who knows? Maybe not. Keep your ears open.