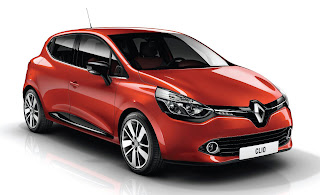 Renault has released pics and details of the curvy new Clio which illustrates their new design ethos. According to Laurens van den Acker, Senior Vice-President, Corporate Design: “New Renault Clio was conceived as a piece of sensuous sculpture which stimulates desire. Like muscles, its curves express the dynamism radiated by the DeZir concept car. No acute or aggressive angles, just voluptuous curves that make you want to go up to it and caress it.”

Maybe he needs to get out more. Whatever, it is a smart looking wee thing, but oddly enough it will be available only in five-door form. That means no two-door sporty hatches, or does it? 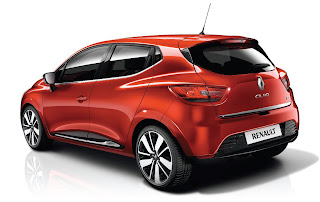 Renault is also promising a radical new approach to its in-car entertainment and information displays through its already established Renault R-Link electronic interface media system. Available as standard from the Dynamique spec upwards, a new seven-inch (18cm) touchscreen will be combined with intuitive voice commands to allow users to ‘personalise’ the system for safe and simple access to essential functions, without the driver having to take his or her eyes off the road.

But this will only be a starter. Just like tablet computers and touchscreen phones, there will be an ongoing series of additions and developments to enhance the device and its functions. Renault has engaged the services of ‘Paris Incubateurs’ (a Paris-based hot-house for young talent) to extend this functionality to include the ability to check messages, manage a diary, locate the nearest service station or car park, or, heaven forbid, send a tweet! 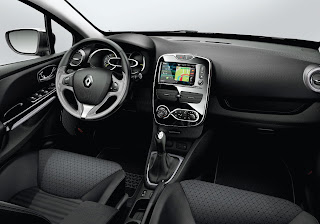 Rather more worrying for the older generation, and neighbours, is a new sound system known as Renault Bass Reflex, which promises to deliver the volume of a 30-litre home speaker system. Bass frequencies are more powerful and the threshold of saturation and distortion is pushed much higher.

So, no mention of late night or early morning noise curfew then – at least you’ll know when the weans get home!

There will be two petrol engines (Energy TCe 90 and TCe 120) alongside the diesel line-up. The 899cc, 90 hp, Energy TCe 90 engine is Renault’s first in-house three-cylinder turbo unit and comes with Stop&Start and is claimed to deliver the performance of a normally-aspirated 1.4-litre engine. The four cylinder, 1.2 litre, TCe 120 engine will have a six-speed EDC transmission (Efficient Dual Clutch), a first for Renault in the B segment, and promises the performance of a 1.6 litre unit.

There will also be a new 90 hp version of the 1.5 litre dCi oil-burner, equipped with Stop&Start. This will also have the option of the EDC dual clutch transmission.
Posted by John Fife at 20:49