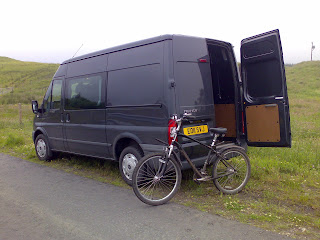 I met a nice farmer today. I was inside the back of the Transit loading up the bike after a cycle ride along the Monklands railway path during my lunch break.

I was unaware of any human presence till a deep voice boomed out: “I hope you’re not tipping here!”

Well, it gave me a fright, so I shouted back: “I’m not in the habit of tipping waiters, binmen or postmen, so you’ve got no chance either.”

By this time I was backing out of the van to meet the face behind the voice. Apparently he has a lot of trouble with people tipping rubbish on the verges, and worse, over his fences into his fields, and he thought I might have been just such a litter lout.

I explained since I don’t like cycling on the public road (it’s too dangerous) I use the van to transport the bike to more secluded spots off the beaten track, and it just so happens his fields border the verge where I had parked the van next to the railway path.

Anyway he went away chuckling.