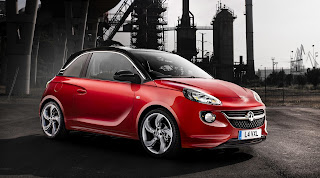 After months of teases, hints and impressions, Vauxhall has released the first official pictures of its new ADAM today.

When it goes on sale early next year there will be three introductory models. The  JAM will be fashionable and colourful, the GLAM will be elegant and sophisticated and the racy/sporty version will be called SLAM.

There will be a choice of three efficient ecoFLEX four-cylinder petrol engines, a 1.2-litre 69 bhp unit , plus two 1.4-litre engines with either 86 or 99 bhp. All will be available with optional Start/Stop technology and a five-speed manual gearbox.

Later on, ADAM will be the first car in Vauxhall’s range to adopt the new-generation small petrol engine, featuring direct injection and forced induction, and an all-new six-speed gearbox.

A new top-of-the-range infotainment system will support new media sources, including Bluetooth, as well as connectivity for smartphones with Android or Apple iOS software. This enables access to internet-based applications, including GPS navigation. The system will use a seven-inch, full-colour touch screen.

The new Advanced Park Assist II system will be available as an option whereby drivers engage the system with a button on the dashboard and it tells them when they reach a parking space large enough to accommodate the car. The system then automatically steers them into the parking space, with the driver only needing to control the brake, clutch and gears. APA II uses ultrasonic sensors to work its magic, and always comes in combination with Side Blind Spot Alert (SBSA).

The new car is not quite 3.7 metres long and is 1.72 metres wide. With front and rear tracks of 1485 and 1478 mm respectively, in a 2311 mm wheelbase, and front MacPherson strut suspension, with a compound crank system at the rear, it sounds quite appealing. Wheel sizes range from 16 to 18 inches. ESP is standard and includes a Hill Start Assist function.

Handling on urban roads is enhanced by a CITY mode, which increases the electronic power steering system’s assistance at lower speeds.

There’s no doubt the wee car looks good, but can it do for Vauxhall what MINI has done for BMW, or the new Fiat 500 for Fiat?

The only thing that can hold it back – is the name!