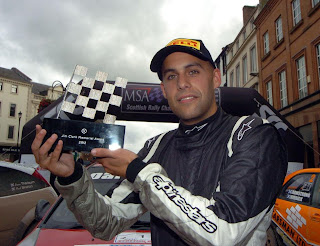 The Association of Scottish Motoring Writers has honoured Dumfries rally driver David Bogie with this year's Ford-sponsored Jim Clark Award in recognition of his sporting achievements.

The 24 year old was unable to attend the formal presentation ceremony last month due to a clash of dates with the annual Jim Clark Memorial Rally in Duns. The rally which is a counter in the national Scottish Rally Championship usually runs in May, but had to change its date due to public holidays and the Queen’s Jubilee celebrations in the Borders.

The actual presentation therefore took place in front of a home crowd in Dumfries town centre at the conclusion of this year's RSAC Scottish Rally based in Dumfries.

On receiving the award, Bogie said: "It's a real privilege and a proud moment. You only have to look through the other winners of the award – including the McRaes. That says it all. It caps a fantastic day when I've also won my local rally. First class."

David received the Jim Clark Memorial award in recognition of his success in winning the 2011 Scottish Rally Championship and the British Rally championship – the first driver to achieve the double in the same year.

This was also Bogie’s third consecutive Scottish title win and matched the achievement of the revered Drew Gallacher who won back-to-back Scottish Championship titles in 1978, 1979 and 1980, but never actually won the British title. With his hat-trick of Scottish crowns, Bogie has therefore become only the second driver to do so since the national Scottish series started in 1957.

Presented annually by the Association of Scottish Motoring Writers and supported by Ford Motor Company, the award recognises the contributions and achievements of Scots in the world of motoring and motor sport.

The Jim Clark Memorial Award is in memory of the Scot who, in a Lotus 49 at the Dutch Grand Prix in 1967, gave Ford its first ever Formula One win with the new Ford-Cosworth V8 Grand Prix engine.