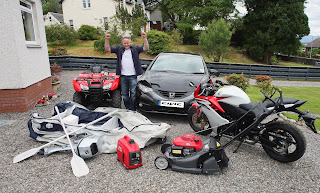 Next time you’re on the ferry to Mull, don’t pick an argument with the ship’s cook, he probably won’t give a toss. So if the pie is still cold and the gravy comes in slices, keep your peace, otherwise you might be wearing it.

Picked at random from almost 100,000 entries, Michael McGovern’s name came out first, and to say his gob was well and truly smacked is something of an understatement:  “I’ve never filled in any online competitions before and I still don’t know why I did this one,” laughed the Oban resident, “When I was told I’d won, my first reaction was that it was a con. It took a bit of time for the reality to sink it. Somebody has to win and it might as well be me! To say I’m happy would be a bit of an understatement!”