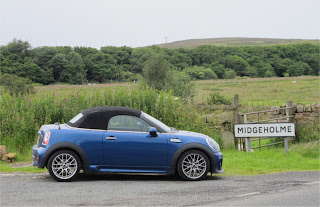 The idea of a ‘Cooper’ badge on a diesel engined MINI seems sacrilegious. It looks about as natural as a plook on a supermodel’s nose. Even more surprising though – it works. And don’t go thinking it’s slow because it’s diesel. Under the bonnet is a 2 litre lump with a twin scroll turbocharger.

It might only have 141 bhp, two seats, and it’s not very big, but it’s got a wheel at each corner, and that translates into a decent bit of fun.

On the way back from the deep south yesterday I veered off the northbound M6 at Penrith and took the A686 through Melmerby to Alston and then over the moor to Brampton. It was raining and the road was wet, including that notorious stretch of hairpins from Melmerby up and over Hartside Pass to the notorious Hartside Top bikers’ rest which is apparently England’s highest cafe at 1904 feet.

It’s no wonder this road is a biker’s favourite. It’s as straight and honest as the scruples of an investment banker. It twists, turns and dips like the road to Dervaig from Tobermory. In fact it was perfect for the MINI Cooper SD Roadster, even in the wet. 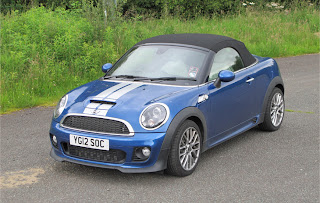 There’s no point in revving the thing. It’s a diesel, but with a six speed ‘box it makes the most of what it has. The other surprise was the amount of grip from the Contisport Contact 3 rubberwear. It went over that road like a hornet with a firework up it’s bum. The mechanical and rubber grip generated huge amounts of ‘hingin-oan’ and finding the limit required a bucket load of confidence. The only time it really broke grip was torque steer out of bends when trying just a shade too hard.

The only downside is the exhaust note. It’s as meaty as a vegan sausage. It’s certainly no 1275 ‘A’ series with whiney diff and the roar of the intake from a big fat Weber, but it’s just as much fun, possibly more, ‘cos it’s quicker.

Wait a minute, there is another downside. It’s looks! Or is that just me?
Posted by John Fife at 16:28