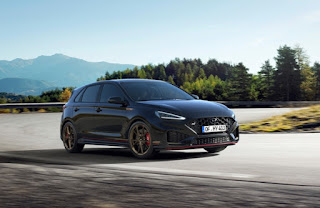 There is no change to the car's 2 litre, 276 bhp, T-GDi  engine but Hyundai’s own eight-speed wet-type dual-clutch transmission has benefitted from a few tweaks. It now has three N performance functions: N Power Shift, N Grin Shift, and N Track Sense Shift.

The so-called Grin Shift (NGS) made me smile. Pressing the button will give the car a 'boost' of an additional 8 bhp for 20 seconds. It might be gimmicky but it doesn't half sound like a bit of fun in these over-regulated times in which we live.

Outwardly the car comes with a choice of two new paint finishes - Phantom Black Pearl or Serenity White Pearl and new design 19 inch alloys. Inwardly there is more alcantara around the cabin and round the steering wheel.

Of the 800 numbered Limited Edition production run, only 75 will be coming to the UK.

Apparently the 'Grin Shift' was the result of feedback from current 'N' range fans and followers, and if it is a success who knows what Hyundai might come up with next. Nice to know that there are some manufacturers out there who still have a sense of fun.