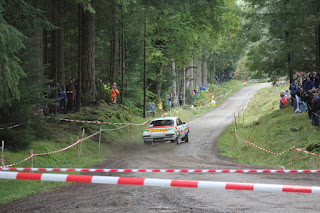 Last week, Motorsport UK issued a Press Release following the conclusion of their successful negotiations with Forestry and Land Scotland. This will enable rallying and other off-road sports to have access to Scotland's forest estate until the year 2030.

With deals already in place for Wales and England, it has taken a wee while longer to finalise the Scottish agreement. That's probably down to the fact that this deal has a slightly longer term lasting for the next eight years.

The news is indeed most welcome although it has taken a long time to get to this stage following months of discussion, negotiation and compromise. No-one has yet seen the final text of the full agreement, other than MS UK and FLS, so fingers crossed there are no nasty surprises hidden in the small print.

What has not been mentioned in the MS UK press release is that much of the groundwork was carried out by four individuals representing Scottish clubs and championships. These unpaid volunteers spent a great deal of time and effort ensuring that such access would be maintained although, as the sport's governing body, it is MS UK who has to formally conclude and sign any such agreement.

However, it will be interesting to see if the phrase 'fit for purpose' makes it into the final agreement as very few folk have seen the final text. This was an assurance that roads would be maintained to an acceptable standard.

Like any other industry, be it leisure or commerce, Forest and Land Scotland are under constant pressure to introduce more sustainability and environmental measures while trying to run a 'timber business' and at the same time cater for ever increasing numbers of public visitors. Theirs is not an easy task and it must be difficult trying to juggle requests and demands from a huge variety of interests.

Motor sport and walkers, hikers, trekkers, birdwatchers, anglers are not natural bedfellows so compromises have to be reached.

Meanwhile it would be really interesting to know what the final terms of agreement were - even the 'four riders of the forest roads' don't know! Thanks lads.

The full text of the MS UK release is here: