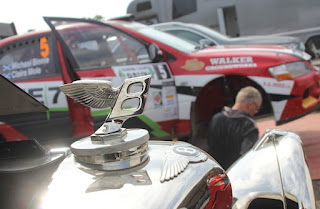 There will be no big report in the magazine from the Brick & Steel Border Counties Rally because it was a BTRDA round, as opposed to a Scottish Championship counter, but I did manage to catch up with most of our lot who were taking  part. By all accounts a good rally and the stages were well received despite pre event fears that the FLS graders had been through!

Top Scottish crew was Michael Binnie and Claire Mole in 5th place with John Wink and Neil Shanks also in the top ten while Ian Baumgart/Sinclair Young and John McClory/David Hood were just a smidgeon outside it.

And if you're wondering about the photo, well, that's another story - keep following ...