With UK rallying at a dead halt, 'UK Rally Scene' magazine has no events on which to report, but far from hanging up their anoraks on a nail on the back of the door and going into lockdown, 'the staff' have used the time constructively - or perhaps that should be historically!

The latest issue is out now and for those of a certain generation there are nuggets of gold inside and for those of more youthful persuasion there is a bit of an insight into the 'golden age' of rallying. The interview with Terry Kaby is a case in point.

I first became aware of Terry in the mid 1970s driving a Triumph Dolomite Sprint. His performances and results in such an unlikely rally machine brought him to a wider audience including team managers, but the big problem was, there were so many good drivers about. It wasn't just results and skill that was rewarded with professional drives, a dash of luck was needed too. Sometimes the wrong guys got the drives and the good guys were left out.

Who knows  where Terry might have ended up had he got the right breaks at the right time. He had the speed and the talent but he was just one in a very competitive field of young and ambitious drivers back in the day.

A wee bit more up to date (and not yet quite 'historic' himself) is an interview with Barry Lindsay, who does things with a Peugeot 106 that would defy Harry Potter in his Anglia. As ever there's more to read and lots to look at. Get the latest issue posted out to you on Ebay now - and it's still only a fiver! 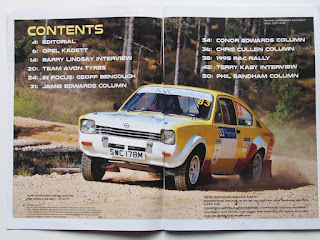