It's in the blood 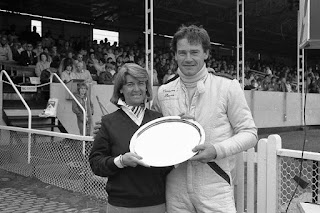 A familiar and popular figure around the Service Areas on Scottish Rally Championship events in recent years is Michael Binnie's Dad. More 'social convener' than Team Manager, Cameron Binnie has been taking a keen interest in rallying, and Michael's progress, and as such has injected a note of statesmanlike civility into the dark cesspit of servicing, service areas and service crews.

A proper gent you might think. Polite, pleasant, cheerful and always well-groomed and dressed - for a farmer. A real credit to the gentrified Borders.

But once upon a time Cameron Binnie was a right tarmac tearaway. In the late 1970s and into the 80s, he was one of the fastest drivers around Ingliston Motor Racing Circuit, Knockhill and at Croft in the North East of Englandshire venturing even further south into bandit territory on occasion.  In fact he won 7 national Formula Ford Championship titles. A mighty impressive record for such a fiercely competitive race series.

Michael might not have been born with a silver spoon in his mouth, but he did eat his corn flakes off a silver platter - but faither had to earn it first, so now you know where it came from.

The main photo was taken at Ingliston after yet another trophy-blagging Formula Ford victory, way back in 1985.

So now we know where the winner of this year's Snowman Rally got his speed from. Not because he cuts a dashing swathe across a hay field with a tractor or tearing up the barley in a combine harvester -  it's in the blood!
Posted by John Fife at 16:31