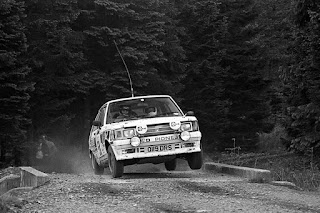 Having upset the Binnie family (see previous post) why stop there? Now to annoy the Morris clan. However, I should add this is not the start of a malicious, slanderous campaign to anger folk just for the hell of it. Think of it as more of a throwback to gentler times in the history of rallying. Here in Scotland we call such gentle humour 'banter' which is ranked way below the more earthy term called 'slagging off'!

Anyway, eyebrows were raised in certain quarters last year when Keith Morris won the Challengers section of the Scottish Rally Championship. That's because the auld gits amongst the rallyistas remember an eager and innocent young sprog from the north east who thought he'd have a crack at this rallying lark way back in the 1980s. 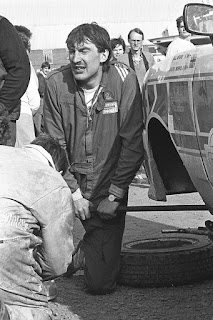 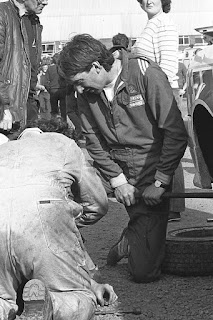 His first weapon of choice was a Talbot Sunbeam Ti. When he wasn't hitting or breaking things and actually reaching the rally finish in one piece he generally did quite well. His best results in 1985 were 17th overall on his 'home' event, the Granite City and topped that with a 10th overall on the Autofit Stages going on to finish 22nd o/a and 5th Challenger in the 1985 Scottish Rally Championship.

Flushed with success (!) he sought success on a grander stage and headed south into Englanshire for the Castrol Autosport British National Championship and even ventured as far as Sweden for a one-off.  He campaigned a variety of cars including a Vauxhall Astra and Toyota Corolla before finally acquiring a modicum of common sense, giving up rallying, and going about the more serious task of earning an honest crust away from the limelight. 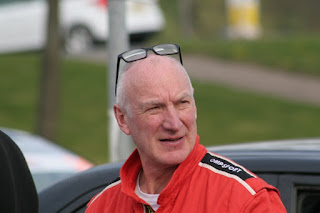 Fast forward 30 years and an elderly gent appears on the Scottish scene with a bright red Mitsubishi Lancer and goes on to win the Challengers title outright last year (2019). And we all thought this was a series to recognise youthful exuberance and upcoming talent. Methinks there must have been some regulation jiggery-pokery going on here, eh?

The pictures show a young man struggling to refettle his Talbot Sunbeam on the 1985 Scottish - and a more recent pic! Looking pure dead gallus Keith, eh?
Posted by John Fife at 16:24