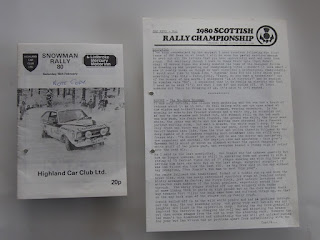 With tales of the 2020 Snowman Rally still fresh in our minds, and since we've got no other rallying at the moment, I have reprinted a report from the 1980 Snowman Rally in the on-line mag.

This was the very first rally report in the second issue of the first ever Scottish Rally Championship newsletter. The newsletter had been introduced as a way of keeping folks informed and interested as the 1980 Scottish Championship had no title sponsor. It was very much a budget operation  after years of support from Shell, The Scotsman, Glayva and British Airways and before Esso Petroleum was introduced as title sponsor in 1981.

The 'SRC News' was posted out to all registered competitors with points tables (no internet and email back then) and also to Car Club newsletter Editors - yet another club service that has mostly disappeared. But perhaps a word of caution, the editorial style of the newsletter preceded 'political correctness' (unlike the more formal 'Motoring News' report of the day) and so this report has been re-printed exactly as it was 40 years ago.

Those early Newsletters were manually typed on to 'skins' which were then wrapped around the drum of a Gestetner duplicator (later on, a more 'advanced' Roneo duplicator). The various pages were then collated, stapled and folded for insertion into envelopes. A similar method was used to print address labels for registered competitors, but the budget did not extend to a franking machine. All postage stamps were applied by hand with a wee sponge to wet them - one of Lady Bunnet's better ideas!

In fact, this newsletter was ultimately the inspiration for, and led to the creation of, the 'www.jaggybunnet.co.uk' on-line magazine.

There's more of these early reports in the archive - if anyone has the stomach for them?