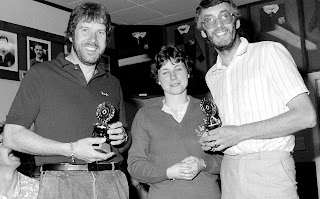 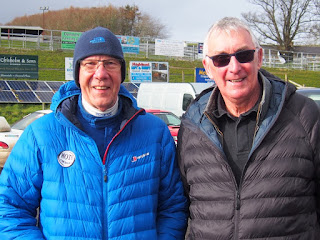 Way back in 1985 when horsepower was measured in bales of hay and stages were timed by sundial two unlikely young (!) lads had several outings in the Weldex International Offshore Vauxhall Chevette HSR. The highlight of their season was 5th o/a on the Andrews Air Conditioning Border Rally at Galashiels for which they duly received their genuine silver (coloured) trophies pictured here (in Black & White).

These two (formerly) young lads met up more recently, last month at the Snowman, in Inverness. One is still competing while the other has more sense - and their zimmers were hidden whilst this latest photo was taken. Can you name them both? Too easy, eh?

In all fairness they were pretty quick back in the day. George Marshall won the rally in his Nissan 240 RS from the Opel Manta of Pete Doughty with Vince Wetton 3rd in his Ascona. Brearley was sandwiched between the 4th placed Escort Mk2s of Pete Slights and 6th placed Murray Grierson.
Posted by John Fife at 17:01