If there was such a thing, and perhaps rallying would be all the better for such an award, then this meritorious accolade would find no better, or nuttier, recipients than this pair of rascals. Last time they contested the ‘wee Mull’ they completed the drive to and from the rally and throughout the event itself with the hood down on their Mazda MX5. And by goad it was wet, really awfy wet.

Apparently this has now become a ‘thing’ and since then they have continued to compete on rallies with the hood down regardless of the weather. And they did it again this weekend. And it was wet again. If this is a ploy to gain better times because of sodden time cards and paperwork on which Marshals cannot write a poor score or a wrong time, then it’s working, they finished 2nd overall.

And their event was not without drama. When a crank sensor broke off they effected a repair using the tried and trusted Scottish dark art of ‘crofter engineering’ whereby they tied it and secured it back in place with a length of baler twine! If there is one thing better than tie-wraps, then it is baler twine. Did you know baler twine has a red British Standard kite mark? 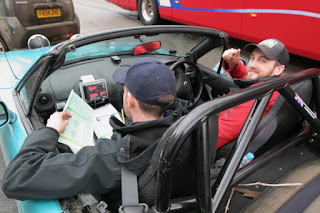 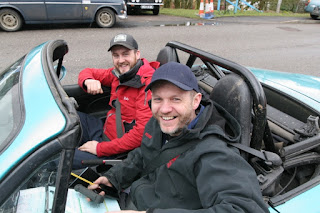