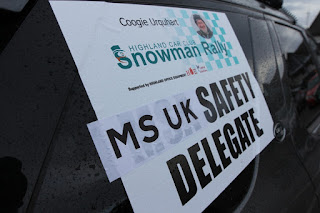 That's the round up from all the Classes on the recent Coogie Urquhart Snowman Rally now in the on-line mag. I know it's a wee bit late but a visit to the Mull Hire Classic Targa rally got in the way. Just the gossip from the Snowman to write up now so that will be done soon.

However to keep us all from wearying too much in these strange and eerie times I wondered if there would be an appetite for old rally reports. The on-line 'Jaggy Bunnet' magazine actually grew out of a Newsletter which was published in the 1980s and 90s and I came across a report on the 1980 Snowman Rally.

Forty years ago this year, the first round of the then unsponsored Scottish Rally Championship, was won by Donald Heggie at a canter setting 19 fastest stage times (out of 21) from Drew Gallacher, Ian Wilson and Mike Hibbert with Drew remarking afterwards: "Donald's the man to beat this year!" But was he?