The news that the Solway Coast Rally scheduled to run  in 10 days time has been cancelled has come as a shock. It was one of the rallying year's highlights. Terrific venue, good roads and a great social atmosphere. If an event such as this can fail to tempt competitors then other events could be in serious trouble.

This news comes hard on the heels of the Mach1 Stages which was in doubt before the rally due to lack of numbers and also last month's Argyll Stages. In fact both of those events took the decision to run although the organisers incurred a loss. Those are circumstances that cannot and will not continue.

There are no 'professional' car clubs in Scotland. All are amateur organisations run by amateurs giving freely of their own time and often supported and supplemented by their own financial resources. On that basis they cannot be expected to organise and run events at a loss.

Competitors often don't help themselves either. Late entries and entries with promises to pay the Entry Fee later or on the day don't help with confidence, and then there are those who enter and simply don't turn up. No excuses, no apologies, just an empty bay in the service area. Promised entries may help organisers to make a decision regarding break-even point, but come the day the non-arrivals can turn break-even into a loss.

Those who do turn up and then complain about lost mileage or stages certainly have a worthwhile gripe, but it's not the organisers' fault. It's fellow competitors.

So what's the problem? Unfortunately this has been an all too common theme on these social media pages. Two factors stand out - rising costs and increasing regulation.

There is another other factor at work here, the increasing variety of other sports, pursuits and pastimes to claim our interest, attention and participation. Rallying (and motor racing) has to compete with sports which are cheaper to enter and compete and often with fewer rules and less red tape. Take mountain  biking for instance. You've only got half the number of wheels and the 'fuel' is much cheaper and less refined - bacon rolls if you're not a serious competitor, green veg, fruit and energy drinks if you are!

Such is the richness of variety on offer elsewhere, even golf is suffering with memberships down at clubs across the country. If they can't compete for the pound in our pocket, what chance has rallying?

So what has to be done? The sport has to be made cheaper and regulation eased. Unfortunately that's not going to be easy given that the government is hell bent on killing off petrol/diesel cars and going electric which poses a whole new problem for the sport. Until then there has to be a concerted effort to reduce costs and complexity and that could lead to unpopular choices. Such as WRC and R5 cars can only compete in  British Championship events while restrictions are placed on  the machinery at national and regional championship level. And how about the introduction of a proper 'Road Car' class, sort of Group 1 but without the manufacturer led tweaks and upgrades! 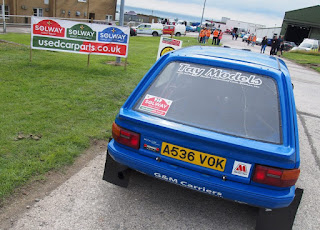 Which brings us back to safety. The price of staying safe has risen dramatically over recent years, but at what cost to sporting participation?

The alternative? We'll all be buying classic cars and doing 'tours' until the oil runs out.

In the meantime there is something brewing in the background and hopefully I'll be able to bring you news of that, or I may just write a longer article for the on-line mag - it'll be too big for FB!!
Posted by John Fife at 10:49