Minding his own business, Alex Scott from Aberfeldy was having a wee bit of a holiday, camping at Machrihanish last week. On Wednesday he dropped into the Glenbarr shop to buy a paper and a coffee and saw a poster for the rally – Marshals wanted. “I’ll have some of that,” he thought, went down to Machrihanish and next thing you know he was part of the set-up crew and would ‘buddy-up’ with a Marshal for the rally itself. On the Friday, Bruce Edwards was giving some local folks a run in the Darrian at a nearby facility and offered Alex a run. This is a chap who knew nothing about rallying and rally cars till last Wednesday! Having watched other folk trying to get into the thing and extricate themselves afterwards, it was Alex’s turn. He sat on the sill as instructed and managed to swing one leg in but couldn’t manage the other – so he took it off. Job done. At the end of the run he slid on to the sill but had trouble getting his other ‘leg’ out so he took it off and passed it out to Bruce’s crew. The wee girl next in line nearly fainted. Anyway, Alex, sat on the sill re-attached both legs and the job was a good ‘un. In case you think this is an insensitive wee story, Alex was laughing his head off and everyone joined in. Gaun yersel Alex. 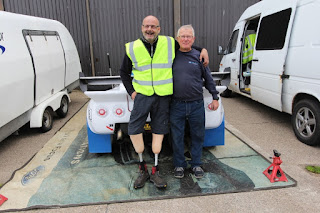