The recent cancellation of the two day Solway Coast and downturn in entries at the two day Mach1 Stages suggests that rally folk don't want multi-day events - unless it's a 1 day/2 night  thrash around a hebridean island in October or a four day historic rally in November! OK, that's a bit facetious, but if car clubs are to organise events that are popular then they have to know what competitors want. 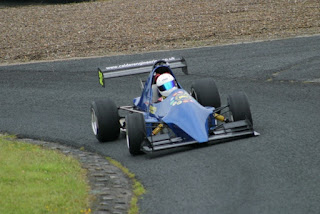 Compare that to the 2 day Sprint which is on at Kames this weekend. In fact most Sprints are 2 day events, both days counting separately for championship points. Practice in the morning, race in the afternoon. Simple. Each run lasts around 1m 20 to 1m 40 seconds so competitors will get two practice runs and two competitive runs for their day's sport. Not a lot of time in the car, eh?

And yet, not a word of complaint. Admittedly some folk turn up in the morning and go home at night but there were others there who camped out - in tents. And it was raining. For sure there were quite a few motorhomes, camper vans and vans with sleeping bags in them - but there were around 70 entries both days.

One of the big attractions is that unless you are driving a 'proper' race car, the rules and regulations are less strict than in rallying. Drivers here are using 'out of date' seats and belts although they have to pass inspection by the Scroots for signs of wear or damage. Roll cages are simpler, personal safety equipment is less stringent and the permitted car 'sound check'  levels are higher. Oddly enough there was no requirement for ground sheets under the awnings!

Between runs, folks mingled and chatted and helped each other, so the atmosphere was good, the competition close and the entry fee was £85 for each day's competition.

Another big attraction concerns the facilities. Kames is a more than a match for any UK-wide club venue with toilets and showers and now a brand new commodious club house and cafe where folk can chill out and chat, and purchase a tea and a pie - or two! (Other foods and salad rolls are available).

Many hillclimbs and race meetings are two day affairs as well with practice on Saturdays and racing on Sundays, so whilst this is accepted practice in motor racing, why so much objection in rallying? 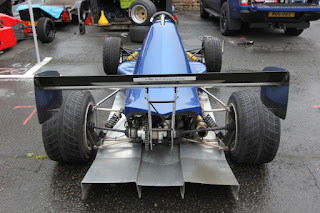 Anyway yesterday's visit provided the chance to see Scotland's latest star in action, and what  a treat for the eyeballs. Louse Calder's 1 litre Jedi was the class of the field as she set the Fastest Time of the Day.

Younger daughter and wee sister of former British Speed Champions, Colin and Heather, ex-kart racer and now sprinter and hillclimber Louise is obviously a spoke from the same wheel. Her car control in dry, greasy and wet conditions was a treat to behold. Weighing little more than a bag of crisps (for the sake of journalistic accuracy, a Multipack!) and driving a car little bigger than a handbag (for the sake of journalistic accuracy, an oversized 'designer label' handbag!), Louise displayed a level of confidence and commitment that was quite simply fascinating to watch. Oddly enough, she didn't look the quickest, but she did look the tidiest and the clocks don't lie. 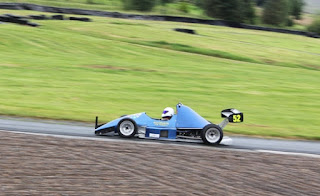 During the first afternoon 'greasy run' watching the car exit the slightly uphill Paddock bend, the rear stepped out as it crested the rise. Unlike her more experienced rivals, there was no wild snatch of opposite lock, but a barely discernible adjustment to her line which set her up for the following downhill sweep to the right. Like she meant that approach and racing line in the first place. In fact that is the trademark of her driving, neat, controlled and quick. Pure dead gallous. Gaun yersel Louise.

I'll return to rallying and it's problems - and perhaps a solution, shortly!
Posted by John Fife at 11:51