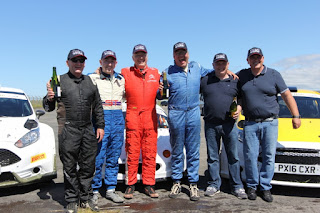 Although the top three positions were close at the end of play yesterday for Day 1 of the Mach 1 Stages at Machrihanish, there was an air of expectancy tinged with a touch of certainty as the sun broke cover on Sunday morning at the start of Day 2. But this is rallying, the only certainty in this sport is that nothing is certain till the Final Time Control is reached and clocked in.

And so it was. Tied for second place overall last night were Alistair Inglis and Gordon Morrison but on the second stage this morning, the rear suspension arm in the Montana Subaru snapped as the crew braked for a chicane. They took out the chicane in the ensuing kerfuffle.

The Lotus Exige was now alone in second place, then on the last stage of the day, long time rally leader Bruce Edwards brought proceedings to a premature halt. The Darrian clipped a tyre on the inside of a tight right which promptly flipped the car on to its roof. Fortunately both Bruce and Jim were OK but the stage was red flagged, and then cancelled as the rescue and recovery crews were called in to action.

Inglis was the new leader but John Rintoul was breathing down his neck and even Tom Blackwood fancied a bit of the action. Faster on Stages 10 and 11, any hopes Rintoul had of snatching a last gasp victory on SS12 were scuppered with the cancellation. The two Fiesta R5s therefore finished 2nd and 3rd, sixty one seconds apart!

Colin Gemmell was fourth in the Mk2 ahead of Greg Inglis who had the rear brake and hub of his Lotus repaired overnight with Donnie MacDonald rounding off the top six.

The top ten also lost Ian Paterson and Andy Horne on a very dramatic Sunday finale. Paterson’s Subaru burst a rear brake pipe and Horne’s Darrian lost compression in one cylinder so he switched it off before any further damage was done.

Kyle Adam scored an impressive top ten finish in his class winning 1600 Mk2 with Des Campbell in the Peugeot just outside the top ten. And looking like an Argyll metal midge overfed on Irn Bru, the wee Metro of Innes Mochrie buzzed round the tarmac to score the 1400 class win although Marcus Tinsley was only 4 seconds behind him - until a con rod made a bid for freedom through the Peugeot’s block. It was that sort of rally.

Bruce and Jim’s violent end to an action packed event was the only downer as the sun finally beat down on flocks of peelly waally legs now exposed to the elements from under baggy shorts. What a belter of a rally, good crack, close competition and weather that could tempt Sebastien Loeb to come over for a visit. The again, the competition might just be too hot, even for him.


(Rally Report and photo in next Wednesday’s ‘Motorsport News’ and a longer more detailed report to follow afterwards in Scotland’s on-line rally magazine)
Posted by John Fife at 17:58