Rally - Thought for the day 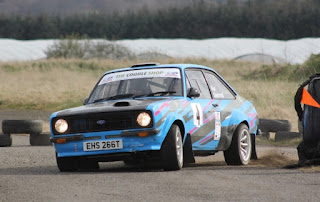 One of the main talking points ahead of tomorrow’s Mach 1 Stages Rally is the number of entries, or to be more precise, the low number of entries. Six years ago the event attracted well over 100 crews but it seems the novelty of a new venue has worn off.
There would appear to be many reasons. Not necessarily cost as the Entry Fee is pretty damn good for the miles you get, but it’s those extra miles that appear to be one of the hurdles. Many folk will need at least two sets of tyres and then of course extra fuel.
Distance from anywhere in Scotland is another issue with most folk losing the whole of Friday to get here and get sorted. A late return home on Sunday means that the trailer and van will need to be emptied at night ready for work in the morning. That makes it a long weekend.

Accommodation in Campbeltown doesn’t come cheap either with one chap telling me his single room is £165 – per night, and he’s staying two nights.
Camping is an alternative with £14 being charged per night at the campsite, but many folk don’t have camper vans or motorhomes and most of us will have left the delights of tent style camping behind us when we were Boy Scouts – or Girl Guides!
Too many events in the calendar is cited as another problem.
A shortage of suitable venues is an ongoing issue, and those who think Closed Roads offer an easy solution must be unaware of the stringent rules and requirements that will limit their use.

So what to do? If the organisers don’t get the support they will lose heart in running the event. Anyone who has been here will be only too well aware of the huge amount of volunteer, unpaid work, let alone time off (using holiday entitlement), to get the site and the stages ready. That’s a massive task given the length of the stages and the vastness of the site.
Having fewer rounds in the championship so that folk are encouraged to go further afield is another option.
A one day event is another possibility.

But the whole idea behind this event was to try and bring something new and different to the Scottish tarmac scene, but if the support is not there, it can only put future events in jeopardy. A great shame.

The auld gits will recall times when rallies were regularly 2 or 3 days in duration while ‘the Scottish’ used to be a week long affair. Gone are the days of adventure and endurance to be replaced with one day ‘sprint’ events.

All events, including those in the forest, are looking for entries these days, so it’s a problem afflicting the whole sport not just this event. And yet more folk are buying classic cars and doing ‘Tours’, is that the way forward?

Another threat on the horizon is electricity. Our own government is trying to curtail the use of petrol and diesel vehicles and our ‘high-profile’ sport will be an easy target for those seeking to make a name for themselves. Somehow I don’t see special stage rallies being run through wind farms so that batteries can get a quick charge up if they plug into a wind turbine – provided the wind is blowing!

So what’s the future? A driving simulator in the house so that you don’t even need to leave home? How will that replicate the noise, smell, stoor and midges for the playstation generation? No doubt the games manufacturers will think of that too.

Troubled times lie ahead. Time for some radical thinking, eh?

In the meantime, I’m looking forward to tomorrow. Looking at the top ten, it’s going to be really hard to pick a winner. Rintoul on a roll? Bruce on the juice, Inglis on the jingles and who knows, maybe even Montana will be up for it with an extra squirt of WD40 in each oxter.