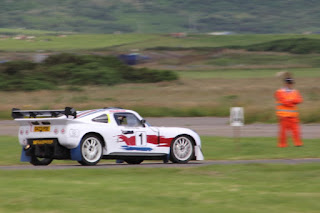 At the end of the first day of the two day Mach 1 Stages Rally, Bruce Edwards topped the leaderboard. First time in the car since this event last year, there was no sign of cobwebs or rust as the wee Darrian tore round the old airfield base runways and roads. It was driving perfection. The Darrian rarely out of shape and the driver rarely out of breath. And yet the pursuit is only 25 seconds adrift after 43 miles of stages – with another 53 miles tomorrow. No chance to relax yet, eh?

Equally impressive was the Lotus Exige of Alistair Inglis tied in 2nd place with the Subaru of Gordon Morrison. Whereas the low slung two seaters look perfectly at home on the tarmac, the Subaru looks hard work with Montana blowing hard, heaving the beast around the twists, turns, long sweeping corners and flat out straights. Where he gains on the high speed bits, the others get it back when the going gets tighter.

At the present time, Gordon is praying for rain. So too is 4th placed John Rintoul who would like a bit of dampness to help his Fiesta R5. “It’s not the car, it’s me,” said John, “I’m still braking way too early for the corners!”

Tom Blackwood is another trying to acclimatise to his new Fiesta R5 and his times are starting to improve earning him 5th at the overnight halt. It might have been better but for a ‘brush with a barrier’ this morning! No damage done.

Young Greg Inglis is 6th and damned lucky at that. As he finished the final stage of the day the boys noticed the Lotus’ rear n/s brake calliper was hanging loose behind the wheel. Major surgery needed overnight.

Colin Gemmell could be classed as best of the rest, his Escort Mk2 holding 7th place ahead of the Darrian of Andy Horne. Donnie MacDonald might have been higher in the Mitsubishi had he not been playing to the crowd, the gravel style approach to and exit from the tarmac corners giving folks a thrill. A lady standing near me gasped at his approach and was about to head smartly to the nearest faraway place till she realised that the car was actually under control – well nearly.

Rounding off the top ten is Ian Paterson and the reason for his poor overnight place is funny. Well, it is now, it wasn’t at the time. As they left the start line of the first stage co-driver Alan noticed that the bright white Lotus of Alistair Inglis was on his second lap and approaching the merge. Never thinking that he would be caught, Ian set off like it was November the 5th but as he started his second lap, Alan was shouting that Inglis was on their tail. “It cannae be,” thought Ian, “he couldn’t have taken that much time out of me.” Thinking that he had, Ian pulled over to let – Andy Horne pass in his bright white Darrian!

By gawd the air was blue when they realised what had happened. To a couple of auld farts, one bright white low slung skateboard is much like another, and they had mistaken Andy’s car, seeded behind them, and which had just left the start of the stage.

Apparently Ian can curse and swear solidly for 10 minutes without repeating himself and that’s only cos he has to stop for breath before starting up again. As I said, it’s funny now.

Yorkshire’s Alan Oldfield is just outside the top ten in his Darrian on his first visit to this sainted mull and Murray Grierson is 17th after breaking a prop shaft on SS2.

The Mk2 of Kyle Adam leads the 1600 class from Peugeot mounted Des Campbell with Ben Wilkinson’s Saxo only 9 seconds behind Des, and just 4 seconds separate the 1400 class leading Metro of Innes Mochrie from the Peugeot 205 of Marcus Tinsley.
And the rally has barely reached the half way point. Anyway, here’s hoping for better weather tomorrow. We were promised sunshine and shorts today, but got sunshine and anoraks. A bit of heat wouldn’t go amiss. At least it’s dry.