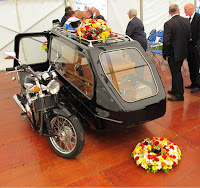 Well, that was different, but entirely fitting, yesterday's wonderful tribute to Robbie Allan. As the four hundred guests - not mourners! - gathered in the open sided marquee with sunlit views across the six tracks at the Tinto Park Moto facility in Lanarkshire, the Reverend Paul Sinclair addressed the assembly.

The tone was set immediately when the Reverend explained how he knew Robbie. Apparently he had known Robbie for over 18 years as he was a keen motor cyclist himself. In fact he was known as the 'Faster Pastor' until he fell off his bike and became the 'Elasto Pastor'. Further chuckles ensued as the Reverend cast his eye over the large crowd and announced that when he initially saw such a large congregation gathering he got so excited he nearly rushed round with his collecting plate.

He then introduced Robbie Allan Jnr who talked honestly and humorously about his father for 20 minutes with complete disregard to his father's own wishes that he should talk no longer than 8 minutes. In fact as he admitted, planning this service was the first time the family had ever had the final say! Brother Vic Allan had been granted 10 minutes, but talked for nearly 25.

And you know what? They could have talked longer and still not made a dent in the man's life and achievements.

It was also entirely fitting that his final ride-out should be by motorcycle, complete with Police motorcycle escort.
Posted by John Fife at 09:29