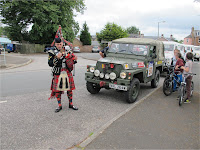 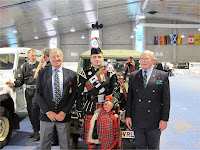 There was a nice touch at Scrutineering in Dumfries this evening when the Armed Forces Land Rovers drove in to the Ice Rink in convoy. They were led in by an original lightweight job driven by Sergeant Major Les Dalton (Retd) and co-driver Colonel Den-MacKay (Retd) who started the whole idea of armed forces personnel doing the Scottish 50 years ago.

As an exercise, rallying, and in particular the week long Scottish Rally (as it was then!), provided an excellent exercise in event planning, navigating and 'field mechanics', and it's a tradition that is still being continued today in the British Rally Championship.

Leading the convoy was Lance Corporal McWhinney who piped them in to the Scrutineering bay in hackle-raising fashion. A little touch of tartan magic.
Posted by John Fife at 18:48