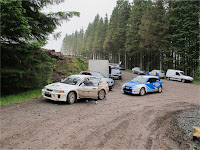 Although 14 crews from the Scottish and Historic Championships had booked to attend this morning's shakedown near Ae Forest, only 9 turned up. They included Euan Thorburn, Mike Faulkner, Brian Ross, Peter Stewart, Ross Hunter, Blair Brown, Callum Atkinson, Scott Peacock and Edmund Peel in his Porsche.

Mike Faulkner only got his Lancer running last night at 10.30 pm: "After the Jim Clark we had to fit new 'shells and bearings to the engine after our 'off'. I've taken that cattle grid flat before so I had no worries. But a shock absorber broke and that was what made the rear suspension collapse. So when we went off, a front wheel kicked back and broke the oil cooler. We switched the engine off quickly so the rebuild was more of a precaution."

Euan Thorburn was doing the same with his Focus: "This was the first run out since the Jim Clark when we had that small fire. It didn't do any real damage.It was just a flash fire when hydraulic fluid hit the hot exhaust, so this is just to check it out."

Ross Hunter gave the Peugeot a good run out this morning, aiming for BRC Challenge points this morning. His Dad Ian said: "We've raised the ride height quite a bit. Ross felt it was grounding out on the back on the Pirelli causing it to handle awkwardly." So they raised it last night with the idea if it didn't work today, they would change it back. It seems to have worked, smiles all round.

Callum Atkinson  had fitted new rakes to his Peugeot after the Him Clark. The RSAC Scholarship supported driver said: The brakes wer abd on the Jim Clark, it was all over the place. So we fitted new brakes for this, and it's still all over the place under braking. So hopefully we'll get it sorted out better today for tomorrow."

At the moment it is damp and a bit breezy which has given some respite from Scotland's vampire midges for those hanging about. Mind you, some of the lads here popped into Moffat this morning to buy repellant. The problem is, now that they have got a taste for succulent rally folks, they'll be out in force tomorrow.
Posted by John Fife at 13:12