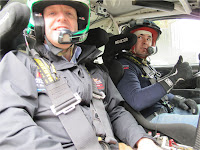 The afternoon pre-Scottish Rally shakedown fizzled out with few folk turning up because of the delays during the rally recce earlier in the day. Still, that meant more pork pies, sannies and dips for those who were there. Every cloud, eh?

Even so, Dumfries & Galloway Councillor, Finlay Carson, got a ride in a rally car, and not just any rally car, a Ford Focus WRC. Euan Thorburn took him round the 2 mile test stage on the far eastern side of Ae: "I thought it would be fast," said Finlay, "but that was mental fast. As we drove up to the stage, I thought that was fast with Euan telling me it was slippy and he was taking it easy! Then once into the stage, it was twice as quick as I was expecting."

"Like many folk I've watched rallying on TV and thought, yes, that looks easy, but that was amazing.  Amazing!"

Richard Sykes was one of the few who made the shakedown: "I always do shakedowns," said Richard, "we always have a problem on shakedowns, so better it happens here than on the rally. Besides I wanted to give the Citroen a run. We put it through a hedge on the Jim Clark!"

So apart from the midges, what else can we expect tomorrow? Well, for one thing, stoor. The rain has seen to that today, so that's a bonus, at least we'll see the cars, not just 'moving stoor' in the forests.
Posted by John Fife at 15:34