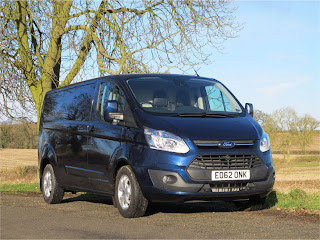 Ford launched its new Transit Custom to the UK press today at an awfy big hoose just outside Daventry. The initial verdict is that this is one heckuva van, but is it better than the current Transit? That will have to wait till a full road appraisal can be done, but based on initial impressions of the 360 mile drive home, it will surely give the nation's current favourite a run for its money.

There are three engine specs all based on the new 2.2 ltr turbo diesel with 100, 125 and 155 PS options, but it has already lost one long-revered Ford characteristic, the early morning rattle when starting it up from cold!

It's obvious from the interior who Ford is targetting with this new addition to the range, Volkswagen's multi-seat option Transporter. The new Custom is flexible enough to do the airport/hotel shuttle business while providing a comfortable carriage for big families. And for the bloke who wants a van during the week and a family/sports holdall at weekends, it's just the business.

There is just one sneaky wee extra on the new range. It's got an ECO button, but it's not just to activate the Stop/Start system, it deactivates the speed limiter. This is the first van to come with a permanent speed limiter which can be set at 56, 60, 65 or 70 mph. The trouble is, the default stetting is 70 mph. Every time the ignition is switched on and the engine started up, the limiter sets itself to 70. And if you forget to press the button to cancel it, you'll soon find out when you try to pass the big truck ahead!

And the clincher? It's got a delicious leather trimmed steering wheel.
Posted by John Fife at 18:29