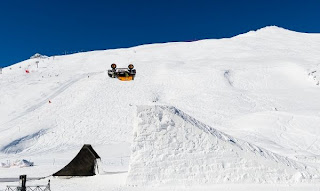 The backflip had previously been attempted by other drivers, but Chicherit has not only become the first automotively-propelled eedjit to execute a perfect landing, he also did it ‘unassisted’. That is, without the aid of a special ramp with moving elements to boost the car’s rotational movement.

He used a static ramp similar to a quarterpipe on a freestyle course, and if you do watch the video – turn the sound up!