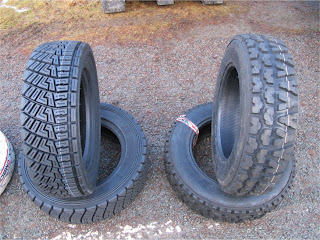 Further to yesterday's weather comments ahead of tomorrow's Snowman Rally, it would appear that there is still snow lying on the peaks. Although the lower part of Glenurquhart is snow-free, the higher parts have still got a few inches of slushy, white stuff. It's the same in the three stages north of Inverness.

What was crisp, white, soft snow last week is now wet and thawing. Heavy rain last night shifted some of the snow, but there is still plenty left. There is no frost forecast for tonight (yet!) and the temperature this morning is above freezing - just.

In other words, tyre choice is not clear cut - maybe that's why DMack has brought snow tyres with them. Unfortunately, no-one has dedicated deep slushy tyres!

At the pre rally test this morning, DMack also had their latest forest tyre with them which has a softer sidewall (allows more flex and generates more heat) than the WRC spec tyres which they used last year. These have been specially developed for British one day forest events.
Posted by John Fife at 10:32