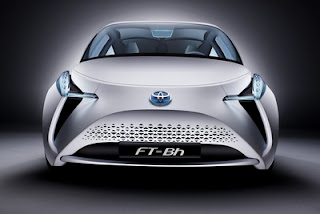 With all the visual appeal of a dead guppy, thankfully Toyota's new FT-Bh concept has engineering and innovation on its side. Thanks to its low weight, exceptional aerodynamics, very low driving resistance and highly efficient powertrain, FT-Bh can achieve an average 134.5 mpg fuel consumption and 49g/km CO2 emissions.
Emissions are about half the level of those produced by a 1.0-litre Yaris and at 3,985 mm in length, 1,695 mm wide and 1,400 mm tall it’s not that much bigger than a Yaris.
At just 786 kgs in weight, it’s also 25 per cent lighter than a 1 litre Yaris. In fact, because the hybrid powertrain is heavier than the three-cylinder 1 litre engine (weighing about 60 kg), the combined mass of the bodyshell, interior trim, chassis and electronics is around 340 kg, one third of Yaris's weight. 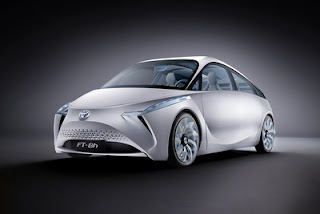 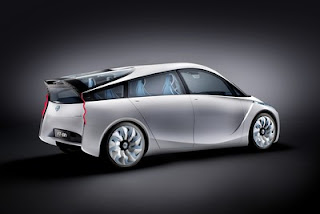 FT-Bh rides on narrow, large diameter 145/55R x 18 low rolling resistance tyres, which make a significant contribution to bringing down the road load and driving resistance, with no loss of grip or traction.
Further goals for FT-Bh were improvements in the recovery of thermal energy and a 50 per cent reduction in electricity consumption. The cabin uses thermally efficient components and the air conditioning focuses only on parts of the car where people are sitting.
The amount of electricity used by the LED headlamps, interior lighting and other electrical components has been drastically reduced, to the extent that power consumption is half that of conventional cars.
Posted by John Fife at 17:39