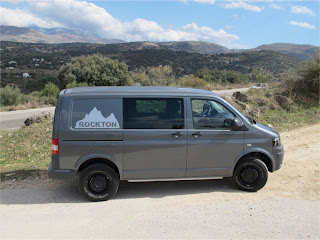 Well, there I was, steering wheel in one hand, gearshift in the other, and a map reproduced from the back of a pocket diary in the other. I was on the wrong side of the road and the signs were all in Spanish. And all I had to do was get myself from Malaga to a spot on the map in the Serrani de Ronda (and I thought Ronda was in Wales!) mountains to the west, a distance of some 120 kms! I got there, but had done 146 kms! 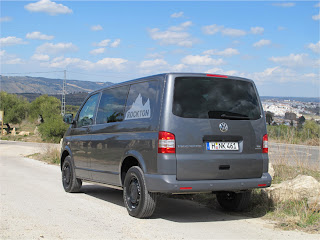 They were paired up in twos - a map follower and sign reader, and a driver - simples. But the vans had SatNavs, although I was told that on no account was I to use the GPS system which was inaccurate in the mountains.

Well, I cheated. I switched it on. At least the map showed the layout of the road ahead, most of the time. Working with the supplied map directions and the SatNav display I managed to set off the in the right direction, most of the time. Then came the new roads and the roadworks.  The little SatNav arrow was taking the van across virgin territory and the Spanish SatNav lady was having whale of a time trying to chat me up. I switched her off. 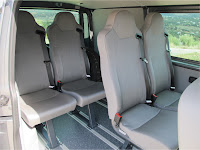 It was just a Spanish version of a regular British problem. Old maps and new roads. But here’s the thing. If Spain is broke and pleading with the Euro-ists for more help and support how come they’ve got so many new roads and well kept highways? It puts our lot to shame. Spend now, pay later? 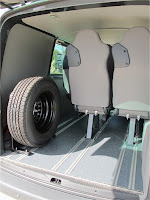 Anyway, I was at the wheel of the new Volkswagen Transporter Rockton, a special edition model of the Transporter van, but it has the all wheel drive 4Motion system, raised suspension and a flexible interior. The van I drove had six seats, but the four in the back were on rails embedded in the floor so could be shuffled about to suit what was to be carried or taken out completely to leave a bare van. In other words, the ideal base camp bus, good for taking climbers munro bagging, or fell walkers to the Lake District.

Volkswagen are good at special editions. They know their market well and have a long standing, enthusiastic and loyal band of supporters and afficionados. Unlike the standard CV buyer more interested in price, running costs and resale value, the leisure lifestyle customer is more willing to pay a premium for what he wants, and if satisfied, will stick with it.

In other words, get the appeal of your vehicle right and you can win friends and influence wallets in all the right places.
Posted by John Fife at 09:46