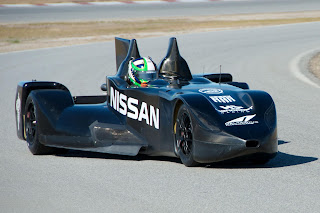 ... but they are. Now I know this Blog is all about Scottish rallying and interesting road stuff, but this falls into the category of 'interesting automotrivia', and there is a Scottish connection!

The Batmobile pictured here is an actual race car. It’s not a model and it’s not April the First. And it has actually been driven on the track.
Built by Dan Gurney's legendary All American Racers organisation, the current team includes US-domiciled British designer Ben Bowlby, American motorsport entrepreneur Don Panoz, Duncan Dayton’s two-time championship-winning Highcroft Racing team, Michelin Tyres North America and major support for the project has come from Nissan. 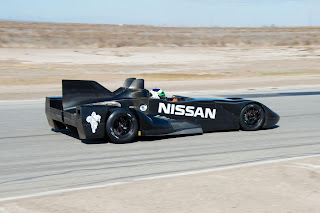 To be called the Nissan DeltaWing, the race car will be powered by a race-prepared 1.6-litre, 300 hp, four-cylinder engine, with direct petrol injection and a turbocharger. The car is half the weight and has half the aerodynamic drag of a conventional racer and is expected to post lap times between LMP1 and LMP2 machines at the Le Mans circuit in France, despite having only half the power of those conventional prototypes.

And thereby hangs the clue. The car will make its race debut at this year’s Le Mans 24 Hour race on the 16/17 June. It won’t actually be classified in the race, but Nissan and the team partners are intending to showcase this pioneering technology.

Paul Willcox, Senior Vice President, Nissan in Europe, said: “Nissan is a very innovative, forward-thinking company prepared to take a risk or two. And exactly the same applies to Nissan DeltaWing. Our involvement in the project shows the boldness of Nissan from an engineering and innovation mindset.” 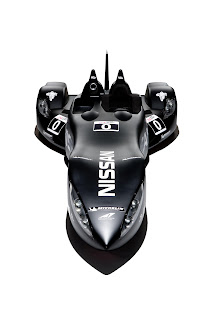 “But this is just the start of our involvement. Nissan DeltaWing embodies a vast number of highly-innovative ideas that we can learn from. At the same time, our engineering resources and commitment to fuel efficiency leadership via our PureDrive strategy will help develop DeltaWing into a testbed of innovation for Nissan.”

Nissan DeltaWing concept originator and designer, Briton Ben Bowlby, said: “Nissan has provided us with our first choice engine. It’s a spectacular piece. We’ve got the engine of our dreams: it’s the right weight, has the right power and it’s phenomenally efficient.”

Nissan DeltaWing is unlike any other racing car currently on track. The driver sits well back in the car, almost over the rear axle and looks ahead down a long, narrow fuselage to narrow twin front tyres, specially created for the car by tyre partner Michelin. With a rear-mounted engine, the car has a strong rearward weight bias, which makes it highly manoeuvrable, while its light weight and slippery shape make it far more efficient.

It’s this innovative design and forward-looking technology that have encouraged the Automobile Club de l’Ouest (ACO) to invite the car to run in this year’s race from ‘Garage 56’, the spot in the pitlane reserved for experimental cars. As it doesn’t conform to any existing championship regulations, Nissan DeltaWing will not be eligible to challenge for silverware and will carry the race number ‘0’.

The car will make its first public demo laps at Sebring, Florida, at 12.30 pm local time this coming Thursday, March 15.
Posted by John Fife at 17:14