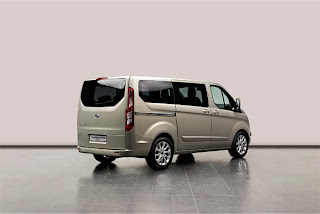 Further to this morning's story about the new Ford Transit Tourneo, which looked like a replacement for the Transit Connect, this in fact will be the new Transit van!

Billed as a 'concept' which is due to get its first public airing at the Geneva show next month, the next generation van will be based on this bodyshell. The vehicle in the pictures is apparently of similar size to the current short wheelbase Ford Transit van. 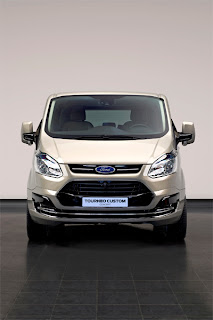 As yet, the interior furnishings have yet to be finalised, and although the concept shows an eight seater layout, the rear seats are not actually removable, they fold away into the floor much like the current S-Max. Whether that makes the final version remains to be seen.

The high waistline and the 18 inch alloy wheels disguise the true size of the vehicle, and while the concept interior shows two front seats there would appear to be room for three, and with two rows of three seater benches in the rear it would be ideal for airport and hotel shuttle duty as well as coping with big families.

As for the commercial van version, there is no news, but the current van was scheduled for replacement prior to the recession scuppering Ford's plans, hence the facelift last year and the adoption of Euro-5 engines. This will see the current van continue until this striking looking newcomer is introduced - possibly next year. More news to come!
Posted by John Fife at 19:13