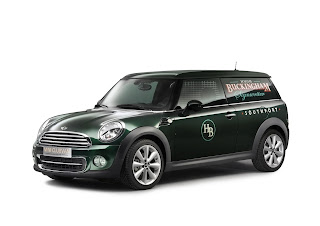 I suppose it was only a matter of time, but having exhausted all other forms of MINI - diesel and petrol, standard and Cooper, 2WD and 4WD, convertible and clubman - BMW have now introduced the van.

Although only a concept, all the pre-Geneva show publicity blurb looks too positive for this not to happen, and the van will be revealed in the metal at the Geneva show on the 6th to 18th March next month.

Based on the MINI Clubman, the concept Clubvan shares its five door lay-out, but behind the two front seats is a flat floor and two-section ‘bulkhead’.
The bottom section of the bulkhead is made from solid aluminium with a stainless steel honeycombe grating above it to protect occupants from a bump on the napper should the load contents shift under heavy braking. To prevent that though, there are six load lashing eyes on the floor.

The original minivan was a huge success so there is no reason to  doubt that this concept would be a success too. That only leaves the original Mini Pickup to complete the set!
Posted by John Fife at 14:38