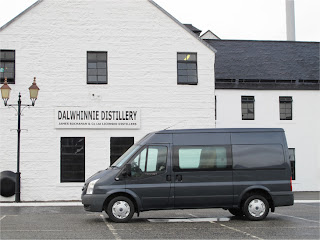 Anyone heading to the Snowman Rally in Inverness tomorrow had better pack the wellies, mittens and bunnets if the weather forecast is to be believed. Wet today and snow tomorrow, but snow could mean anything from a fairy light dusting to a polar bear scale dump.
Certainly it was wet heading north through the pass at Dalwhinnie, but it could have been worse.
Speaking of Dalwhinnie. Why is the Visitor Centre and shop at the distillery closed in January? I would have thought it would have appealed to the skiers, snowboarders, winter wildlife watchers and tourists in search of frostbite heading north for the fun and frolics and then stopping off for a souvenir on the way home.


At this time of year when there’s a distinct nip in the air many passers-by might just fancy a wee snifter of golden Scottish nectar to curl up with when they get home.
Had it been open, I might just have availed myself of a wee tincture of this flavoured distilled 'water of life' for a wee nightcap in the hotel room tonight.
There were a couple of revenue generating camera vans on the A9 heading north, but they are never really a worry when driving the Transit. It might not be quick, but the high driving position provides a better view of the road ahead and less chance of getting booked than the Astra GTE which whustled past the Transit at one point crossing the double white lines to do so!
No doubt they will be out and about again tomorrow. The big dip at the Daviot turn-off on the A9 is a favoured spot.
Anyway, Scrutineering and Signing-On at the Thistle Hotel, takes place tonight which will provide a chance to pick up some news and gossip.
Posted by John Fife at 16:50