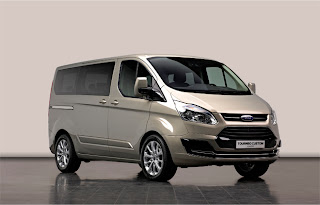 At midnight last night, Ford released this picture of a new model to be debuted at the Geneva show next month. Called the Tourneo Custom Concept for now, this eight seater has fully removable rear seats which would make it ideal for school wean ferrying during the week and chase car duties at weekends.
Just think, the wife would never suspect your ulterior motive if you suggested such a stylish big MPV!

Ford also used the term ‘new family of one-ton Ford Transit people movers’ which kind of gives the game away, and along with a range of three 2.2 litre Duratorq TDCi diesel engines at 100 PS, 125 PS and 155 PS (i.e. no petrol!), tends to suggest that this could be a replacement for the current Ford Transit Connect range. Also the term ‘Tourneo’ is currently used by Ford’s Transit passenger carrying range of vehicles.
But here’s the thing, imagine the current Transit with this nose on it. Vans could become sexy again, eh?
Anyway, we should find out more today. There’s a big meeting of journalists at the NEC today, and Ford will be there along with a number of other automotive companies.
Posted by John Fife at 07:50