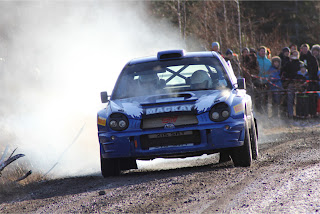 Reay MacKay was surprisingly upbeat at the end of the Snowman Rally - even though he retired the Impreza at the end of the first stage. Despite the bitterly cold air, the Subaru was steaming like an auld kettle as it came through the finish. Only too well aware of the problem Reay wasn't pushing and the car was parked up on the A9 ready for the trailer.

Later he said with a smile: "At least it wasn't the electrics this time," referring of course to the string of electrical loom failures which sidelined the car so often last year, "this time the electrics were reliable and it was a mechanical fault. It wasn't actually the head gasket," he explained, "but a loose connection between the radiator and the engine which lost the water." 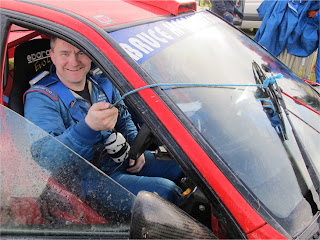 Another driver with a smile on his face was Bruce McCombie whose new engine arrived on Wednesday and was installed for the Snowman after a string of non finishes last year, but his day was not without its problems. The wiper motor failed, hardly ideal in the wintry conditions.

"I didn't want to distract Michael (Coutts) the co-driver," said Bruce, "He's got enough to do with the Notes, so I attached an elastic to the far side of the wiper and the car bodywork, and a wee rope to my side passsing through the window so that I could pull it against the elsatic and it would pull the wiper arm back itself for another wipe. It worked fine!"
Posted by John Fife at 12:13