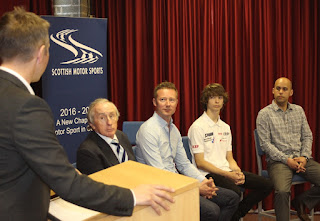 There's a vacancy at the top of Scottish motor sport although the vast majority of folk will be completely unaware. After 8 years in the post, Pete Weall stepped down as Chair of the Scottish Association of Motor Sport Clubs a couple of weeks back at the AGM. Usually the Vice President steps up in a seamless transition to take charge but not this time. Due to his own pressure at work the incumbent VP felt he could not give the time and therefore declined the post of Chair.

And therein lies the problem. Who would have the time and energy to take on an unpaid task of this magnitude? There's another problem, there is currently no job description. That is the first task the present committee has to resolve.

The trouble is each Chair has brought his or her own stamp to the role in the past and Pete will be a hard act to follow, because he took on too much. He freely admits he took on too much so any future Chair can rest a bit easier.

But given the predicament, surely this presents an opportunity to properly define what the SAMSC is and what the Chair has to do to take it forward? 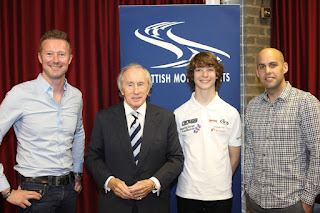 Motor sport is facing one of the biggest challenges of its long and illustrious life, not just the rising cost, complexity and regulation of the sport but the increasing costs of participation and therefore the difficulties in attracting new participants. Added to that is the threat of carbon emissions. Motor sport is not the biggest contributor (not by a long chalk) but it is the most highly visible user of fossil fuels.

That means on e of the bigger tasks facing motor sport ahead of the incoming electrical revolution is getting the public on-side. And it's not just emissions, if rallying is being squeezed out of the forests then there has to be some give and take with regard to getting the use of closed public roads. Public acceptance here is vital, as one 'stage-side' objector alone can cause havoc and route cancellations. And we're supposed to live in a democracy!

What is needed is a stronger (and more professional?) SAMSC which can deal at a decision-making political level with SportScotland, as well as national and local government. Since the Edinburgh based 'Scottish Motor Sport' was disbanded two years the sport in Scotland has no direct link to the political classes. Instead the majority of decisions are made in Bicester. Indeed surprise was expressed at the time when MS UK decided not to co-fund SMS, because the law up here is different from other parts of the Union.

Take just one example. Forest & Land Scotland is a quite separate decision-making entity from Forestry England, Natural Resources Wales - Forestry, and the Dept of Agriculture, Environment and Rural Affairs NI - Forestry. What gives some non-elected personnel in a  different part of the UK the right to make decisions where their jurisdiction could be questioned?

So here's a revolutionary thought. If SAMSC needs a new Chair how about paying someone to take on the job rather than asking a volunteer to give up his or her time and subsidise the job out of his/her own pocket?

Where would the money come from? A grant from SportScotland and a contribution from MS UK - on the basis they take fees from Scottish competition licence holders and event organisers so a percentage could (should?) be provided for regional governance. Motor sport in Scotland is one of the very few sports which doesn't have its own 'governing' body. If the bikers can do it, why not the motorists?

Apparently the 'SAMSC Chair' job description will be circulated to all member Scottish motor sport clubs and nominations for the post of Chair sought. Could this provide the opperchancity for a bold new move?