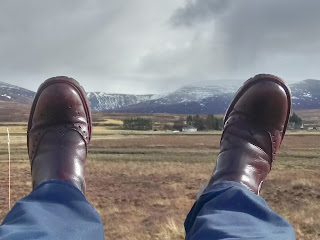 Rally boots... Heading north for the start of the forest rallying season in Scotland, but with mixed feelings, excitement, apprehension and also guilt! Guilt because my boots are being donned for sporting pleasure, whereas some 1500 miles to the east millions of people are putting on walking boots, or work boots, for entirely different reasons and thousands are putting on army boots. It just seems so odd that normality reigns here while not too far away a supposedly intelligent and educated bully sitting in a luxurious ornate gilded palace can simply issue an order to fire bullets, shells and missiles indiscriminately at civilians while making an unprovoked attack on an entirely innocent nation and the rest of the world is powerless to stop it. Life isn't fair, but it has to go on - doesn't it???
Posted by John Fife at 09:50