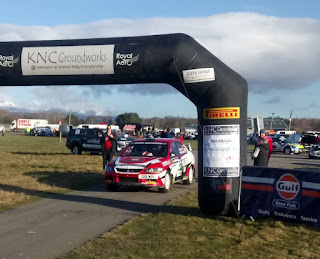 What a start to the 2022 KNC Groundworks Scottish Rally Championship! Making it back to back victories on this year's AM Phillip Trucktech Snowman were Michael Binnie and Claire Mole in the Mitsubishi Lancer Evo9, and no one more surprised than them.

When the mighty MINI WRC of David Bogie and Kevin Rae limped out with a rear puncture, all bets were off and all pre-event predictions were binned. "I didn't see anything, I just felt the bump," said David. The impact also bent a rear arm so he had to do the second stage with the car steering from the rear as well as the front.

Binnie was fastest over that opener but Freddie Milne and Patrick Walsh in the Fiesta R5 were only 2 seconds slower. Game on.

Binnie's fastest time in SS2 was matched by the Ford Focus of Bruce McCombie and Michael Coutts but Milne was only a second slower but matching his time were Jock Armstrong and Cameron Fair in the Subaru!

This was turning into a real scrap and there was no way Bogie could feature in it? Could he? He stormed through SS3 a full 17 seconds quicker than Milne who was one second up on  Binnie with Armstrong a further three seconds back.

Fastest through SS4 was the MINI whirlwind again, this time by just four seconds from Milne which meant Milne was now in the lead.

This is rallying though. Binnie emerged from the final stage in the lead once again. Milne's Fiesta had mysteriously cut out and stopped dead mid stage with the seconds ticking agonisingly by as he struggled to resuscitate the beast. Eventually it fired up but over a minute had been lost.

Scott MacBeth and Daniel Forsyth were an excellent 5th in the rebuilt Lancer while Scott Beattie and Paula Swinscoe were fighting for a podium finish until the Evo7 had to be rescued from a ditch in SS3 by the Marshalls. At least he got out, John Wink's Hyundai was stuck fast. First time out in a left hand drive car Donnie MacDonald finished outside the top ten.

There will be a full report and photos in next Thursday's 'Motorsport News' followed by the usual more comprehensive report in the 'jaggybunet' on-line mag.