Road - The Man from Ford 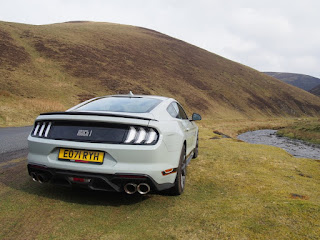 He cometh and he taketh away! Sad to say, the press appraisal Mustang has been reclaimed and returned. However, there should be enough fumes in the tank for the driver to get it to the nearest filling station for a re-fill. Having said that it did require a top-up during its short stay. At best it was returning 29 mpg, at worst -- rather less!

Trouble was it was all too tempting to switch it into Sports mode, and revel in the rumble of a 5 litre 454 bhp beating heart under the hood, sorry, bonnet!

It'll require some recovery time before composing the Road Test report which will be published shortly in 'jaggybunnet.co uk', but in the meantime, the Beast did get the ultimate Seal of Approval from one brand new fan.

Sad to think that Grandbaby Bunnet will grow up in a near silent electric motoring world missing out on the deep throb of a V8, the beat of a flat four or the sonorous song of a BDA in full flight. The electric car manufacturers say they can reproduce any sound, but can they reproduce the physical and aural sensations? I doubt it. 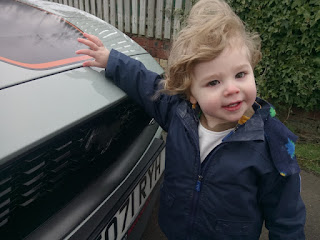